Oil Positive On Omicron And Powell’s Confidence In The Economy

surpassed the $80 mark in Tuesday’s trading, near two-month highs and solidly above the 2018-2021 pivot levels near $75. Oil’s fall in November-December by more than a quarter from a peak in late October probably served as a reset for oil.

Interestingly, oil rose yesterday against plainly bearish news. The WHO warned of a sharp rise in Omicron cases in coming weeks, and Oman’s oil minister said OPEC+ did not want to see oil at $100 and overheat the market.

However, traders were reading between the lines. The rapid spread of Omicron is coming closer to the point of reaching collective immunity, raising the chances that summer travel and the holiday season will this time be much more pre-pandemic like.

While initially causing some pressure on quotations, Oman’s comments on oil did not present anything new in substance. As before, the cartel intends to stick to its plan to raise production by 400K per day every month.

This is more than enough to shift the balance in the market towards surplus at the start of the year, but not enough to avoid causing excessive overheating of oil and provoking a new shale boom in the US and elsewhere.

In addition, oil was probably positively impacted by Powell’s confidence in the economic recovery, which is not threatened by either Omicron or several rate hikes this year. Locally, investors interpreted this as confidence in a surge in oil demand in the coming months, which boosted the price. 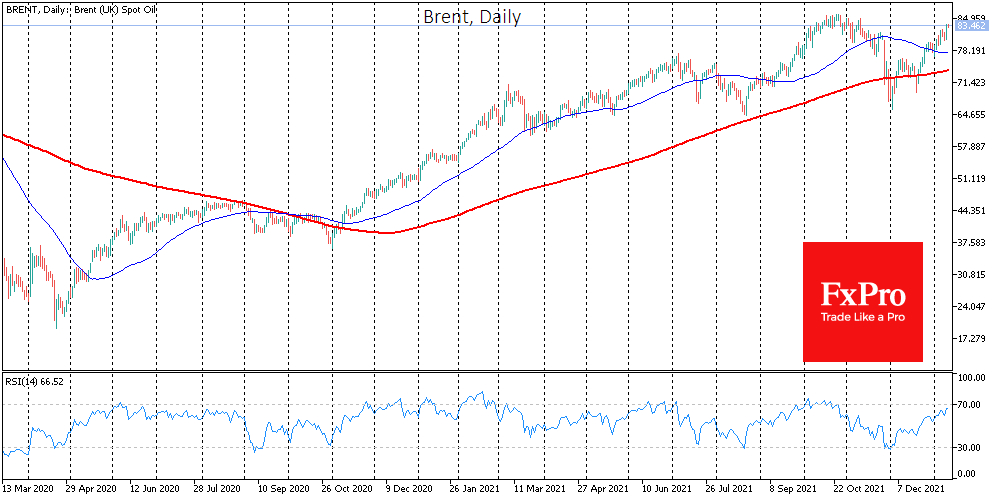 It will not be surprising if oil goes off to retest October highs near $85/bbl WTI and $87/bbl in the next couple of weeks. If the demand for risky assets remains in place by then, we would expect a start of a rally towards $100 and an entrenchment in the $80-100 range through 2022.

However, we cannot rule out that the speculative optimism in oil will fade as the Fed’s tough stance on the economy is realised.

The Quick & Easy Guide To Freezing Rows in Excel

Another Blow To Sentiment | Investing.com

Nations to adopt Bitcoin, crypto users to reach 1B by 2023: Report By Cointelegraph