prices will be led this week by what the US government reports for stockpiles. Meanwhile markets will closely watch the (CPI) as commodity markets enter greater supply-demand and inflationary test periods after a strong start to 2022.

Crude had an outsized opening week for the year, rallying 5%, ironically on OPEC’s higher production plans rather than any surfeit in demand. Supply disruptions in Libya and Kazakhstan were partly responsible for the run-up. But the bulk of the gains came after the by the Organization of the Petroleum Exporting Countries and its allies—known as OPEC+—to add 400,000 barrels per day in output from February.

OPEC+ is unwinding the historic production cuts—of some 10 million barrels per day—it carried out at the height of the coronavirus pandemic in April 2020. The alliance still has some four million barrels to restore before reaching what could be regarded as “normal supply,” and the process could take till the end of the year or even cross into 2023.

The squeeze which OPEC+ put on economies needing more oil amid the recovery from the pandemic has created an extraordinary situation where production hikes by the group are celebrated like demand events.

Wall Street banks and research houses have also legitimized this thinking by pointing out that if the world’s oil producers raised output they must be sure about demand, and oil longs eyeing $90 or more a barrel have eagerly lapped up this notion.

Five years ago it would have been absurd to see crude prices falling 5% in a week when OPEC announced a half-a-million barrel hike in production. But in the new order of the energy world, OPEC+’s word is gold, and, once prolific, US shale oil drillers are happy to lead from behind amid the less-than-friendly drilling policies of the Biden administration.

Oil’s Focus Could Be Squarely Back on EIA This Week

Anyway, with OPEC+ done for the month, Libya’s supplies normalizing after a pipeline damage, and the situation in stabilizing with the President in charge after recent unrest, focus should return this week to the inventory data put out each Wednesday by the US government’s Energy Information Administration (EIA).

Last week, the EIA reported a build of 10.13 million barrels—the biggest in 21 months. also rose, three times more than expected, while the underwhelmed against forecasts. Normally, oil prices wouldn’t go up 5% in a week with these sorts of numbers. But as stated earlier, these are extraordinary times in energy, and such absurdities must be understood, or at least tolerated.

Some analysts, however, say one reason for last week’s gargantuan build in fuel inventories was that those with crude barrels in their hold were dumping them on refineries to be turned into products in order to avoid 2021 year-end tax liabilities on crude.

Also, part of the fervor over oil last week was anticipation that the US for December, scheduled for release last Friday, would be big. That turned out to be a big miss, and pricey stocks on Wall Street fizzled significantly, but crude prices fell less than 1% at the close.

In the absence of other steering energy news, economic data or macro political events, the EIA figures are expected to be the dominant guide for the market this week.

West Texas Intermediate, the benchmark for US crude, settled at $78.90 per barrel last week. By 12:30 AM in New York Monday, the so-called WTI hovered above $79 in Asian trading.

London-traded , the global benchmark for oil, settled Friday at $81.75, and traded at just below $81.90 in Monday’s Asian session.

For the week, Brent rose more than 5%, also rising for a third week in a row in a run-up that has delivered about 10% in all.

With increasing evidence that the Omicron variant of COVID isn’t having a debilitating impact on the economy, despite the sheer number of reported infections, gasoline and distillate consumption performance should be better this week. Otherwise, crude prices could have trouble maintaining their latest unbroken three-week-long rally.

Direction for gold prices will likely come from Wednesday’s US CPI release. In its last reading, the CPI showed a 6.8%-rise in the year to November—its fastest growth in 40 years. Another runaway number like that could help gold reclaim the $1,800 berth convincingly—that is if it does not first cause another untoward spike in the US , and the that could combine to smother gold.

Gold futures’ most active contract on New York’s COMEX, , settled at $1,797.40 on Friday, down 1.7% on the week for its biggest weekly decline since November. In Monday’s early afternoon trade in Asia, it hovered at around $1,792. 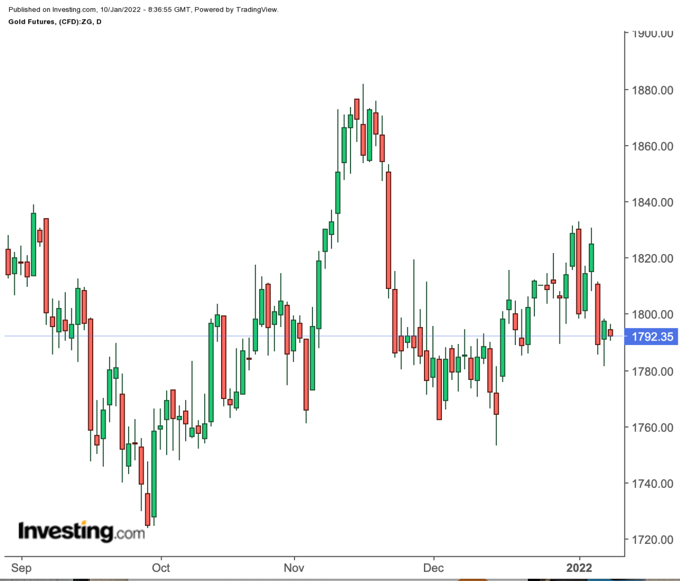 Analysts say gold is at an inflection point where it could break out and continue to chase the US inflation theme or collapse under the weight of rising US yields and the dollar.

While gold labors below the $1,800 level and the 50- and 200-day Simple Moving Averages, “a continued selloff seems less likely,” said Ed Moya, analyst at online trading platform OANDA. But he conceded that “if bearishness resumes next week, buyers could emerge at the $1,770 area.”

Last week’s action in gold also proved something else: that a massive wall of resistance awaited longs at above $1,830 an ounce.

Gold has tried in vain to crack the $1,830 resistance numerous times since November. It made another attempt last Wednesday, just before the release of the Federal Reserve meeting for December that indicated the first pandemic-era US rate hike might come as early as March.

The $1,830 wall could now be a longer-term stay, say chartists plotting gold’s next technical move.

Disclaimer: Barani Krishnan uses a range of views outside his own to bring diversity to his analysis of any market. For neutrality, he sometimes presents contrarian views and market variables. He does not hold a position in the commodities and securities he writes about.