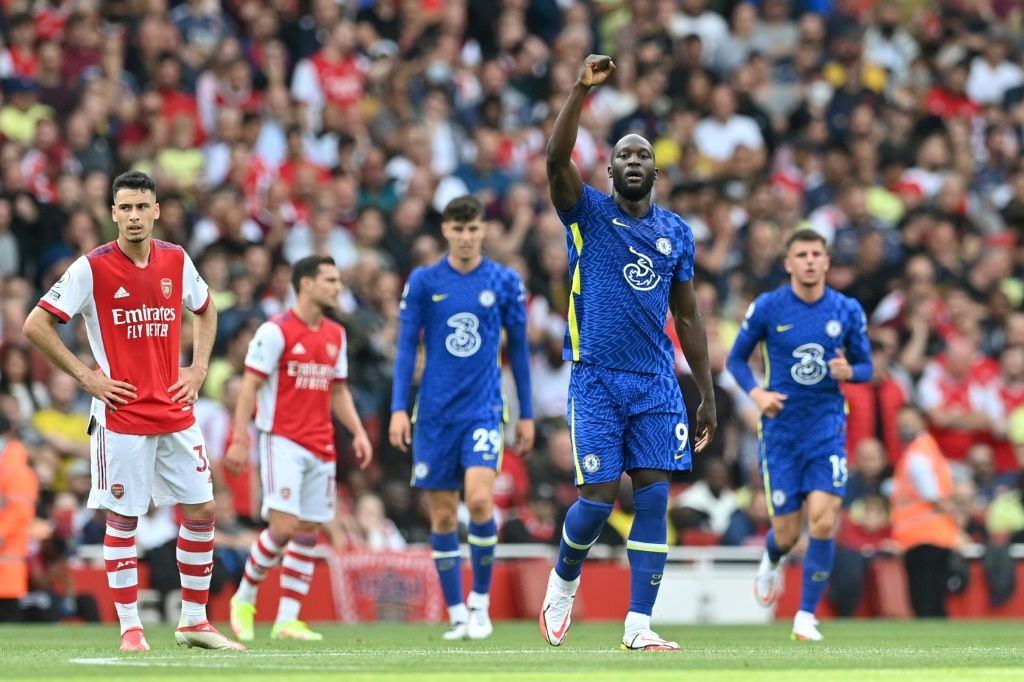 In Sunday’s other game, Mason Greenwood salvaged a 1-1 draw for Manchester United at Southampton.

Lukaku has rejoined Chelsea from Italian champions Inter Milan for £98 million ($133 million) and the Belgian striker made an immediate repayment on that huge investment in the London derby at the Emirates Stadium.

The 28-year-old spent three years at Chelsea between 2011 and 2014, but rarely featured and never scored before being sold to Everton.

Lukaku, who endured a difficult spell at Manchester United before flourishing at Inter, took just 15 minutes to showcase his power and predatory instincts.

Holding off Pablo Mari, Lukaku kept the Chelsea attack going before shrugging aside the Arsenal defender as he surged into the six-yard box to tap in Reece James’ cross.

James scored Chelsea’s second himself with a superb strike into the far corner after Mason Mount picked out the unmarked defender inside the Arsenal area.

European champions Chelsea have made a flawless start to their title challenge, winning successive games without conceding a goal.

“I’m very happy with how he has integrated already, a very smart guy who likes to be in the group,” Chelsea manager Thomas Tuchel said.

“He gives us something we did not have, to protect balls. You cannot start better than a goal and he assisted some chances.”

Lacklustre Arsenal were booed off at half-time and Mikel Arteta’s team are pointless and goalless after following their limp loss at Brentford with a second defeat.

“They were the better team. It is one of the difficult moments. The circumstances are difficult and unprecedented,” Arteta said.

“Feeling sorry for yourself doesn’t help. You have to win football matches, keep it together and show spirit.”

At Molineux, Kane came off the bench in the second half after the Manchester City transfer target missed the first two games following his late return from his close-season holiday.

Tottenham were already leading through Dele Alli’s 10th minute penalty by the time Kane arrived on the scene.

Alli was fouled by Wolves keeper Jose Sa and the midfielder picked himself up to notch his first league goal since March 2020.

Kane replaced Son Heung-min with 19 minutes left and received a largely positive reception from the travelling Tottenham fans, who sang “Harry Kane, he’s one of our own” as Wolves supporters mockingly chanted “He’ll be a Manc in the morning”.

Kane had a golden opportunity to mark his return with a goal when Steven Bergwijn picked him out, but his shot was repelled by Jose Sa.

Despite Kane’s miss, it was a winning return to Wolves for Tottenham boss Nuno Espirito Santo, who was back for the first time since leaving in the close-season.

“Harry is still in the process of increasing and improving his level of fitness, but he is one of the best players in the world,” said Nuno after Tottenham’s second successive league win.

“You can see how he helped the team in terms of possession and the fine lines. We need everybody.”

At St Mary’s, United failed to build on last weekend’s 5-1 demolition of Leeds as they trailed to Fred’s own goal.

While Ole Gunnar Solskjaer’s side left the south-coast frustrated, they did equal Arsenal’s English top-flight record of 27 successive away league games without defeat.

Southampton took their controversial lead in the 30th minute.

Bruno Fernandes felt he was fouled when a barge from Jack Stephens left the United midfielder in a heap but referee Craig Pawson waved play on.

Moussa Djenepo and Adam Armstrong worked the ball to Che Adams on the edge of the United area and his shot deflected off Fred’s out-stretched boot as it flashed past David De Gea.

Greenwood equalised in the 55th minute, firing under home keeper Alex McCarthy from 12 yards after Paul Pogba poked the ball into the teenager’s path.

“We can’t go from one extreme of volleyball or basketball last season to rugby now. I like the more lenient way, it’s more men’s football but still, that’s a foul,” Solskjaer said.