Inflation surged in June to 5.4%. It may retrace soon, but there’s a good chance that it will increase again later, boosting at last.

The inflation monster has reared its ugly head. The CPI annual rate surged to 5.4% in June, accelerating from already mind-blowing 5% in May. It was the hottest pace since the Great Recession. However, Fed Chair Jerome Powell and his colleagues from the FOMC still claim that inflation will only be temporary, as it was boosted by the reopening from the Great Lockdown, while others predict a replay of the stagflation from the 1970s. Who is right?

Well, it’s true that some inflation measures will decline in the near future. After all, the economy faces supply chain bottlenecks, which are causing price spikes. The global shortage in the supply of semiconductor chips is one of the temporary problems that led to the annual 45.2% spike in the price of used cars in June, accounting for more than one-third of the surge in the overall index.

However, used vehicle prices are skyrocketing not just because of the problems on the supply side, but also because of a higher-than-expected demand. And where did this strong demand come from? You got it – from the extra cash that has been created and distributed to people. There is so much liquidity in the markets thanks to very easy fiscal and monetary policies that people just want to buy stuff, no matter the price.

As Milton Friedman notes, “inflation is always and everywhere a monetary phenomenon” – prices cannot keep on rising without the expansion of money supply. So, supply bottlenecks are only one driver of rising inflation – the surge in the broad money supply, the reduced pace of globalization and the complacent stance of central banks are other factors.

What’s more, even if we drop the subindex for used cars from the calculation, the annual inflation rate would be 3.6%, almost twice the Fed’s target. Indeed, there is still some base effect, but even if we compare the recent inflation readings to February 2020, we see in the chart below that the CPI is 4.7% higher than before the pandemic. 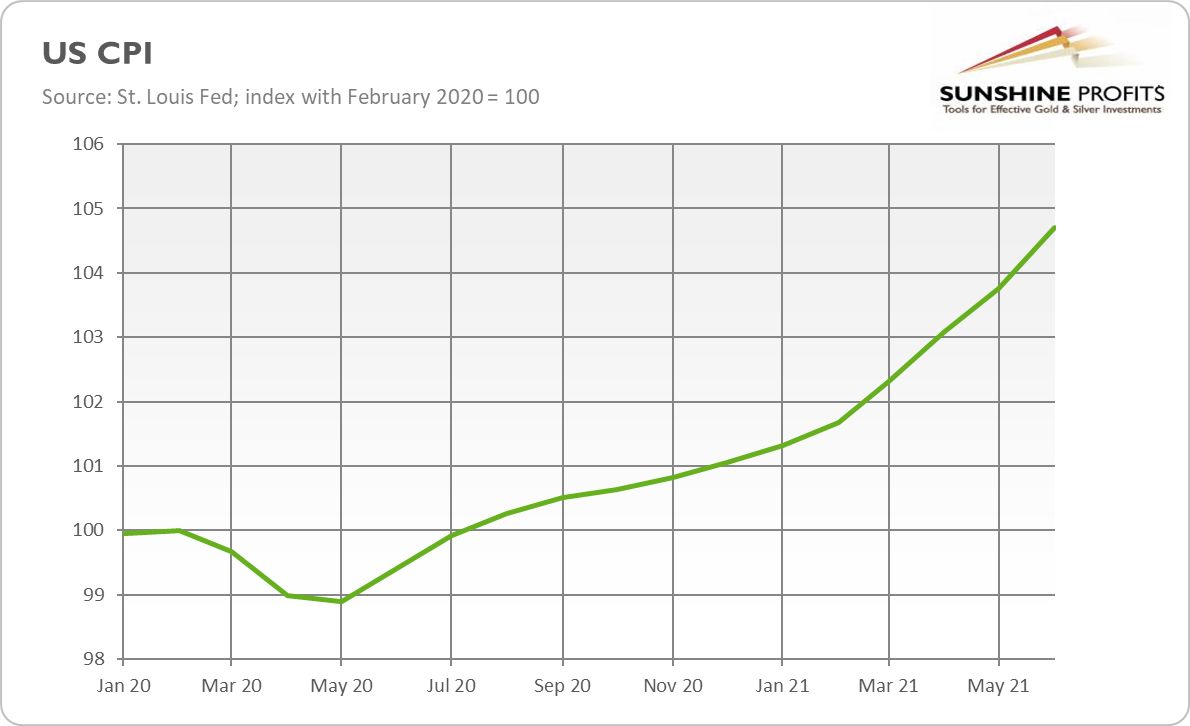 So, some improvement in the supply of semiconductors (if we drop out low CPI readings from the calculation) could soften inflation somewhat in July or later this year. However, even if inflation backs out of its current pace, it will likely remain elevated; even experts admit it. The economists polled by the Wall Street Journal forecast that inflation will drop to 3.2% by the end of this year and stay above 2% through 2023.

There is still high inflationary pressure that should keep consumer prices boosted. For instance, the ISM® Prices Index registered 92.1%in June, indicating that raw materials’ prices increased for the 13th consecutive month. The index has risen to its highest level since July 1979. Producer prices are also rising, while transportation costs, in particular freight prices, are skyrocketing. All this should add to the inflationary pressure, possibly translating into higher consumer prices in the future.

Another important issue is that inflation often comes in waves. So, even if the first bout ends soon, it won’t mean that the threat of high inflation is going to disappear. It might be the case that we are just in a transitional phase, slowly moving into a period of higher inflation. Please take a look at the chart below. As you can see, the stagflation from the 1970s didn’t show up overnight. 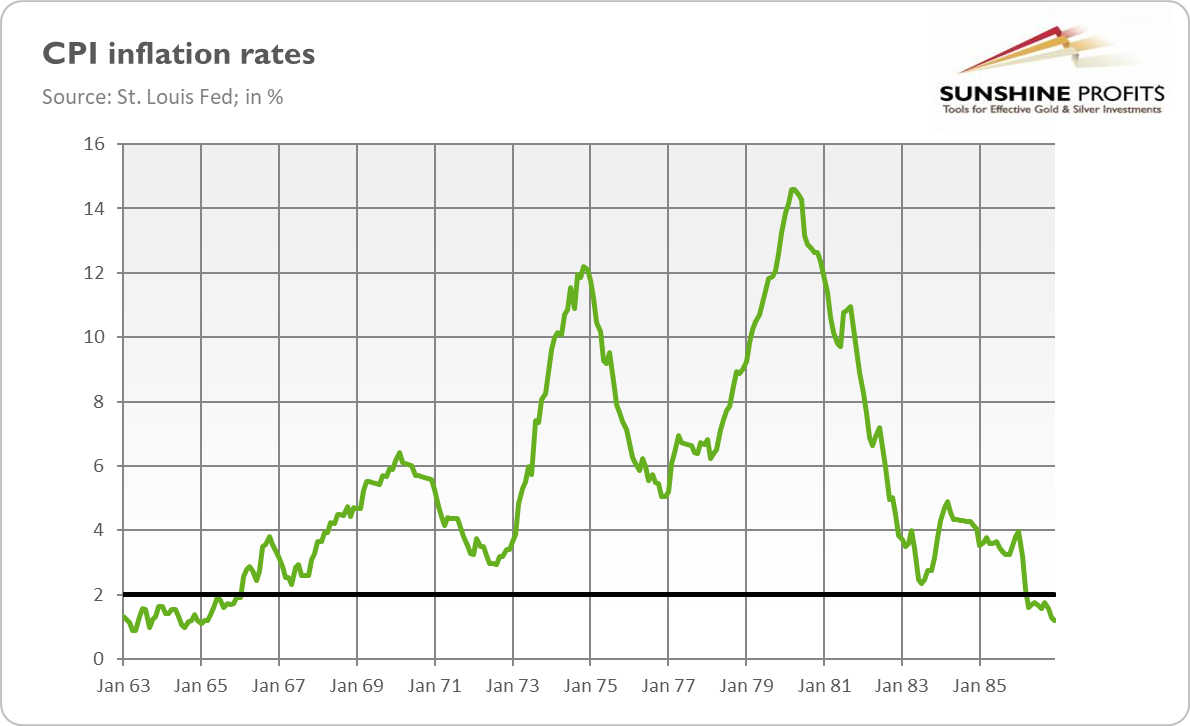 So, the first bout of inflation always looks temporary, but it may lay the groundwork for even higher inflation, especially if inflation expectations de-anchor. And, indeed, although medium-term consumer expectations remain stable, one-year expectations have recently risen, as the chart below shows. In the case of New York Fed’s Survey of Consumer Expectations (red line), they have soared 0.8 percentage points, reaching 4.8% – a new series high. 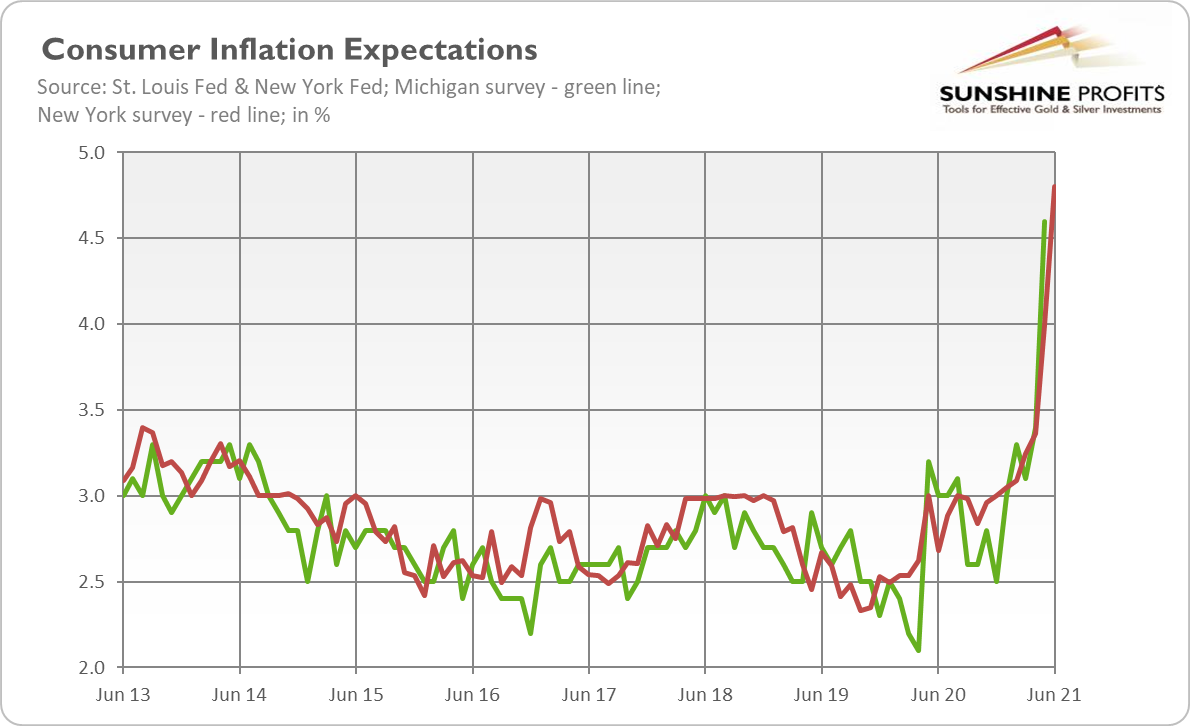 What does it all imply for the gold market?

Well, initially, the impact of inflation might be negative. This is because the markets will eventually react to higher inflation and the more hawkish Fed. So, the bond yields will rise, increasing the opportunity costs of holding gold.

However, after some time, higher inflation will become disruptive for the economy. Either real household incomes or corporate profits will decline (depending on the companies’ ability to pass surging costs), while higher interest rates will trigger some defaults. When inflationary psychology sets in and people start to worry about all the bad consequences of inflation, gold should shine. So far, the party goes on; but a hangover lurks just around the corner.