After an overheated first half of the year, has been ranging since July. The price, which has now topped out, is likely to attract short-sellers and scare away bulls.

Crude’s luster has been waning since the price peaked on July 6, when the commodity hit its highest levels since 2014. That coincided with the market’s shift in mood from optimism regarding the global economic recovery to pessimism on the matter, as the rate of contagion from the Delta variant accelerated and the virus once again grabbed hold of the news cycle.

The persistent, and still spreading COVID strain, has forced the return of social restrictions and disrupted demand for WTI during the crucial summer travel season. Plus, yesterday’s release that most of the Fed’s regulators believe it’s time to begin tapering the central bank’s bond purchasing. That boosted the , which also happens to be the base currency for crude, making oil more expensive for importers, thereby likely curbing additional demand.

As well, yesterday’s EIA release indicated that though fell, rose, possibly providing a leading indicator regarding what’s ahead for oil.

With those fundamental indicators augering a continued in the price of oil, technicals appear to be in agreement. 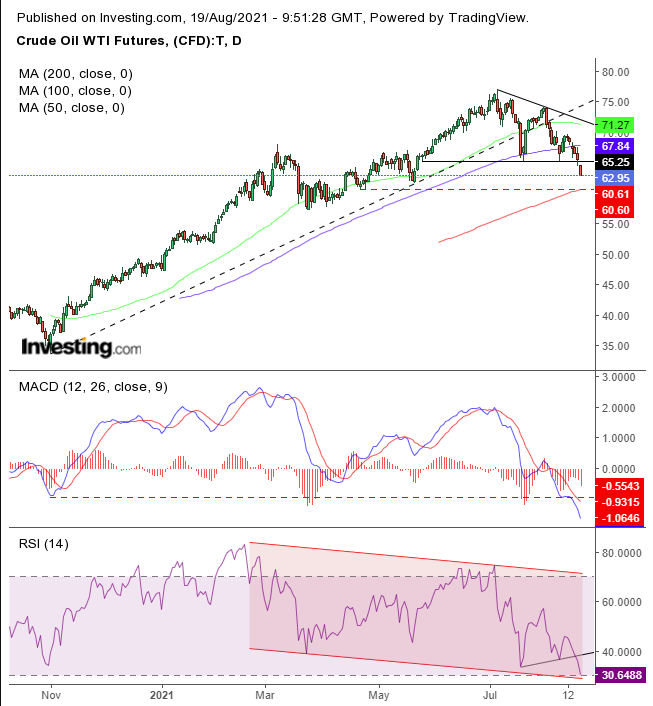 WTI opened 1.4% lower today, creating a rare breakaway falling gap, demonstrating how much energy there was in the selling, as long traders were stopped out and short sellers took control of the trade. The next support can be expected above the psychologically round $60, where the 200 DMA awaits, reinforcing the presumed support of the April-May lows.

After the uptrend line since the November low crumbled under the weight of supply, and both the 50 and 100 DMA failed to provide ongoing support, momentum is clearly to the downside. Still, a rally is likely in the form of a return-move, and the described support above $60 levels is a potential place for the price to bounce off.

Also, the RSI fell through a recent support, extending its decline from the June top. However, the momentum-based indicator is reaching both an oversold condition, as well as the bottom of its falling channel, setting it up for a potential corrective rally—matching the possibility of a return move, as discussed above.

Conservative traders should wait for the return move that reasserts bearish dominance at the bottom of the top.

Moderate traders would wait for the same corrective rise, to reduce exposure by nearing resistance, not necessarily for confirmation.

Aggressive traders could enter a contrarian long position, counting on the return-move—suggested by a forming hourly hammer—before shorting with the rest of the market when it is drowned out by remaining supply beneath the pattern. We cannot stress this enough: a trading plan is necessary. Here’s an example:

Author’s Note: This is just a sample. And it isn’t necessarily the one, true way to approach this trade. It’s also not the analysis. That’s in the body of the text. If you haven’t read and understood it, do NOT attempt to trade it. Even if our analysis is spot on, it is based on statical past performance. Investors don’t behave the same way each time so statistics from past performance can only be somewhat predictive overall. Plus, of course, our analysis could be wrong.

The objective of a professional trader is not to win each trade. That’s impossible. All they’re trying to do is manage their luck as they operate along statistical results and hope to win overall. Before you enter a trade, close your eyes, and imagine the trade losing. If you can’t handle that, do NOT enter the trade. Your trade plans must incorporate your budget, temperament and timing. Until you learn how to write a tailored plan, feel free to follow ours, for the purpose of learning, not profit. Or you will end up with neither. Guaranteed. And there’s no money back.