AMD: 3 Drivers Give This Stock More Upside Even After Recent 45% Bounce

Shares of Advanced Micro Devices (NASDAQ:) are gaining momentum once again after a slow start to the year. Their 45% surge during the past quarter is about three times more than the return produced by the benchmark .

This strong rebound leaves investors wondering how far this rally could go, especially after the stock’s more than 1,500% surge during the past five years? 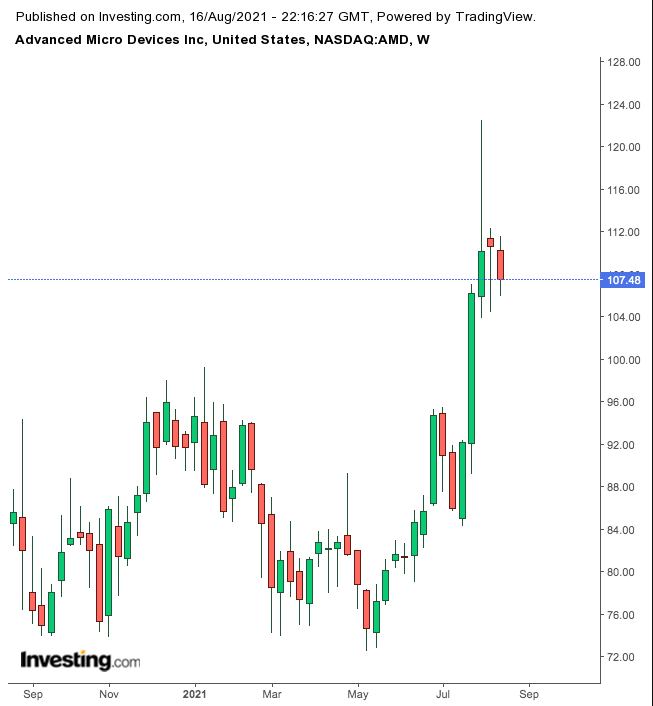 There are three major catalysts that support our view that AMD is in a strong position to outperform its semiconductor peers in years to come, making its stock an ideal candidate for any growth portfolio. Here’s a closer look:

One of the major drivers fuelling the momentum in AMD stock is the weakness shown by one of its primary competitors, Intel (NASDAQ:).

After decades of lagging behind Intel, the world’s largest chipmaker, AMD has been catching up in recent years. AMD shed its chip-making facilities more than a decade ago and now relies on others to manufacture its products, including Taiwan Semiconductor Manufacturing (NYSE:), which runs some of the world’s leading chip producing plants.

That outsourcing strategy helped AMD at a time when Intel suffered a series of manufacturing setbacks, repeatedly falling behind in introducing new chips. This year’s release of its EPYC 7003 server processors, for example, is proving to be a game-changer for AMD and its server market.

With third-party reviewers saying the new chips offer more than double the performance of Intel’s best, AMD’s market share gains in this lucrative, high-profit margin server category are likely to accelerate this year, leading to a significant earnings boost.

Plus, inroads have been made not just in servers. AMD’s other business lines—from traditional PCs to gaming—are also booming. The company makes the main processor chips for Microsoft (NASDAQ:) and Sony’s (NYSE:) next-generation consoles. Demand for those devices has exploded during the pandemic.

AMD has also benefited from another line of business, selling processors for data centers. That segment has taken off with the introduction of new generations of high-performance chips in recent years under Chief Executive Lisa Su.

Until recently, Intel’s data center unit served more than 99% of the market for chips that are at the heart of corporate networks and internet infrastructure. But that lead is under threat given the years of stumbles in Intel’s manufacturing operations.

These market gains are translating into robust earnings growth for AMD, providing a solid reason for investors to remain bullish about the company’s prospects. In the second quarter, profit more than tripled to $710 million and sales surged 99% to $3.8 billion, helped by the burgeoning demand for high-end processors, like the Ryzen and Radeon.

AMD also provided a bullish forecast for Q3, predicting sales will be about $4.1 billion, higher than analysts’ projections. As well, the company raised its annual outlook and now expects revenue to increase by 60%, up from a previous forecast of 50% growth.

Gross margins rose over the , moving from 43.9% during Q2 2020 to 47.5%, while EBITDA (earnings before interest, taxes, depreciation and amortization) margins also jumped, hitting 24.4% compared with the 12.7% AMD reported for the same period a year ago.

These gains come as AMD focuses on selling only its most profitable chips, leaving the lower end of the market to Intel.

“We’re focusing on the most strategic segments of the PC market. We believe that the data center business will continue to be a strong driver for us into the second half of the year.”

This improvement in the company’s top- and bottom-line profitability makes AMD a fast-growing and fundamentally robust business. During the past three years, the company’s cash flow generation has improved significantly, with operating cash flows surging to $1.07 billion in 2020 from just $34 million in 2018.

AMD is also better positioned to perform when chip shortages are hurting many players in the industry during the COVID-19 pandemic. What is differentiating AMD is its long-term relationship with its main supplier, TSMC. This year, TSMC said its “high-performance computing” segment, where AMD’s business resides, will be a “major growth driver” for the foundry company.

AMD’s fast expanding market share and its track record of exceeding expectations have prompted many top analysts to turn bullish on its stock. Of 38 analysts polled by Investing.com, 23 have a buy rating on the stock, while 15 are neutral. 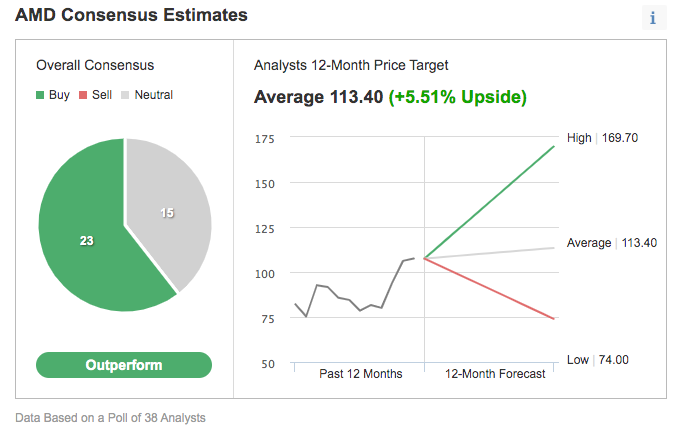 Bank of America Securities analyst Vivek Arya, who has a $120 price target on the stock, said in a note that a possible delay in Intel’s product releases as well as AMD’s recent deal with Google, point to further growth in the company’s data center business.

In addition, AMD’s share of the super-computing market has increased by more than two times in the last six months, and by five times in the last year, which shows “AMD’s improved competitiveness in HPC, a strong leading indicator for future cloud/enterprise momentum,” according to his note, cited by CNBC.com.

BMO Capital Markets analyst Ambrish Srivastava turned bullish on AMD stock, acknowledging that he missed the mark as the company’s run of strong execution has continued. He raised his target price on AMD to $110 from $80 in a note cited by Market Watch.

Srivastava previously thought that estimates for AMD would prove to be overly optimistic, but earnings estimates for 2021 and 2022 are now up sharply since his January downgrade, and he predicts “continued upward bias” ahead, “especially as AMD starts to ramp designs it has already won on the data-center side, from the high performance computing to enterprise, including CPUs and GPUs.”

“(The company) has now executed and delivered to a point that it has carved out a position as a viable alternative to Intel for the foreseeable future.”

There are numerous strong reasons to believe that the stock’s current upward trajecory will continue, given AMD’s earnings growth, its superior execution and its ability to wrest market share from Intel in large and lucrative arenas, including data centers.