Another day, another decline in junior miners—and another increase in profits from short positions in them. Shouldn’t we expect a rebound though?

Well, no. The rebound already happened in late July and early August, and what we see now is the trend being resumed. Consequently, even if it wasn’t for all the long-term analogies to the 2012-2013 declines in and the gold stocks ( Index), one should expect the current short-term decline to be significantly bigger than the counter-trend upswing which ended earlier this month. At this time, the move lower is just somewhat bigger than the preceding rally. Thus, it’s not excessive and can easily continue.

However, let’s keep in mind that periods of very high volatility usually need to be followed by periods of relatively low volatility. That’s when investors verify if the “new reality”—the price levels after the decline—are justified or not. If the market votes “no,” we get huge rebounds and breakdowns’ invalidations. So far this week, the markets have been voting “yes.”

Consequently, the current back-and-forth trading is perfectly normal, and it’s in tune with what I wrote in the previous days—even in the case of the details. While the precious metals are taking a breather, the gold mining stocks continue to decline, but in a steadier manner. That’s what happened earlier this year (in February and in late-June/early-July 2021) and during the 2013 slide. 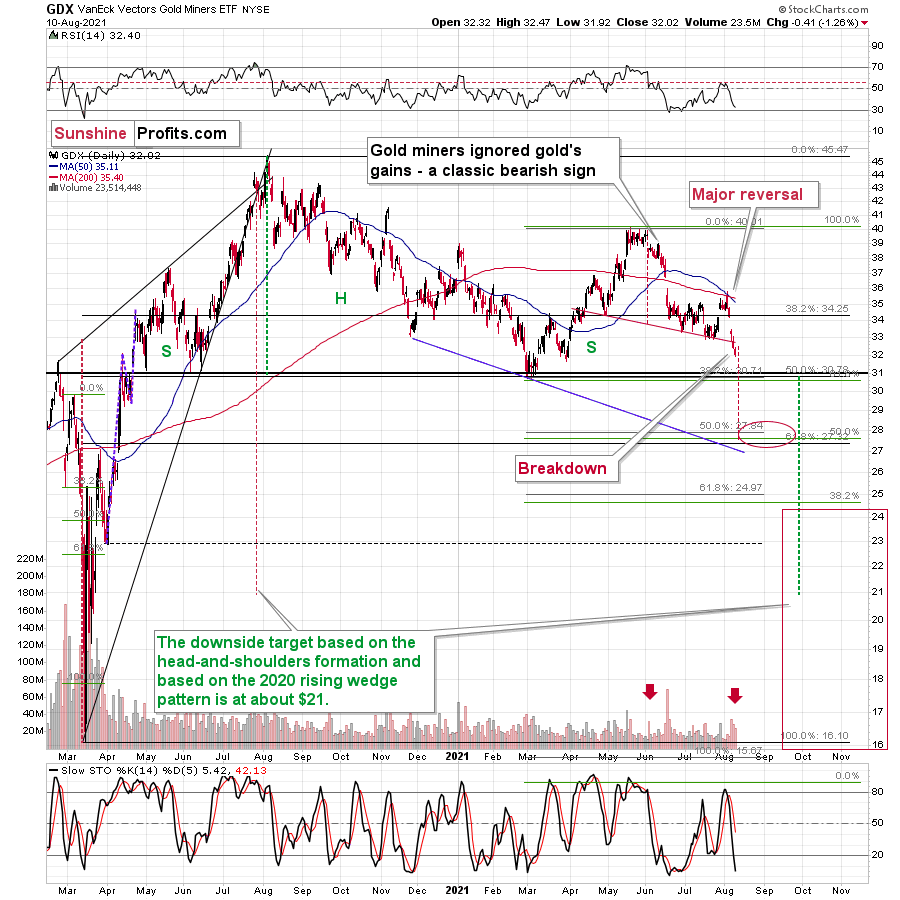 While a steady decline might not get as many heads turning as big daily slides, it also serves a very important purpose. You see, the mining stocks—GDX (NYSE:) including both gold stocks and silver stocks—are now verifying the breakdown below the neck level of the head and shoulders pattern. Once this breakdown is verified (just one more daily close is needed), miners will be likely to fall much lower, as the target resulting from this formation is based on the size of its head. In this case, it implies a move to about $28.

In the case of the junior gold miners, VanEck Vectors Junior Gold Miners ETF (NYSE:), the situation is even more bearish, as they just moved below the previous yearly lows, and they are confirming the breakdown. 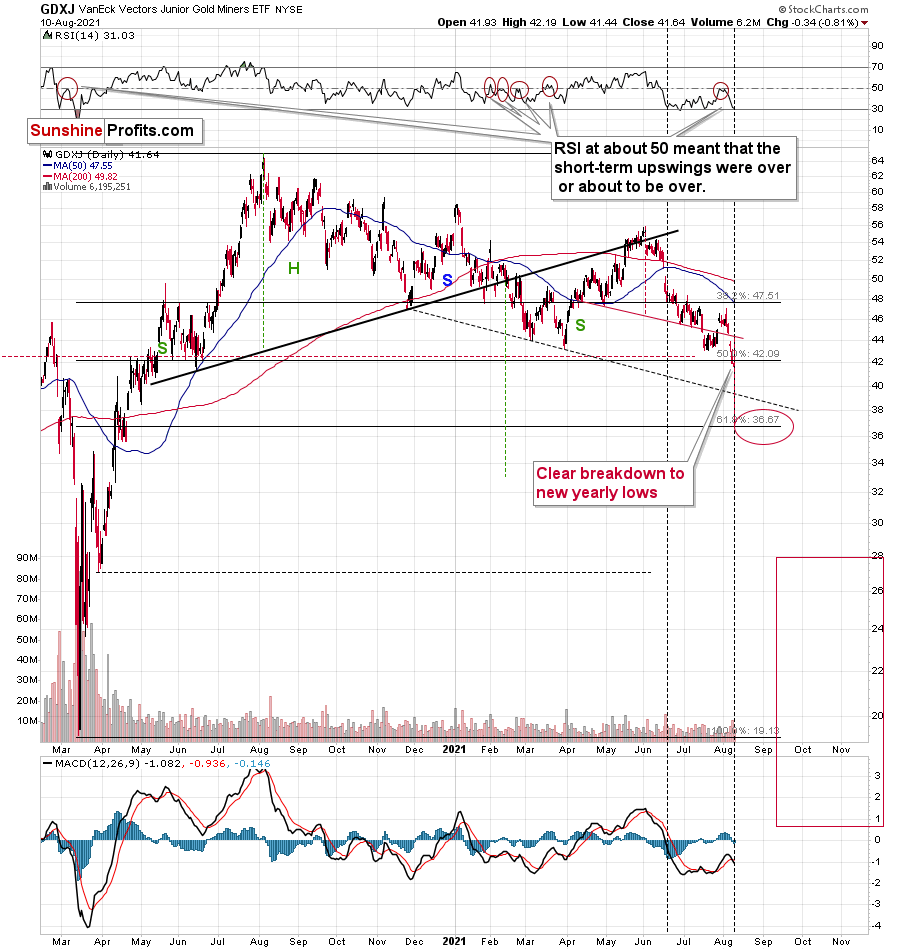 Please note how the junior miners lost their momentum right after declining on relatively big volume. In yesterday’s analysis (Aug. 10), I commented on junior miners’ breakdown in the following way:

“This move was not yet confirmed, but with the significant volume on which it took place, it looks quite believable. Therefore, it wouldn’t be surprising to see a few days of consolidation before senior miners move much lower.”

As I wrote earlier, gold and were not doing much yesterday (and in today’s pre-market trading at the moment of writing these words), but it’s a perfectly normal phenomenon. 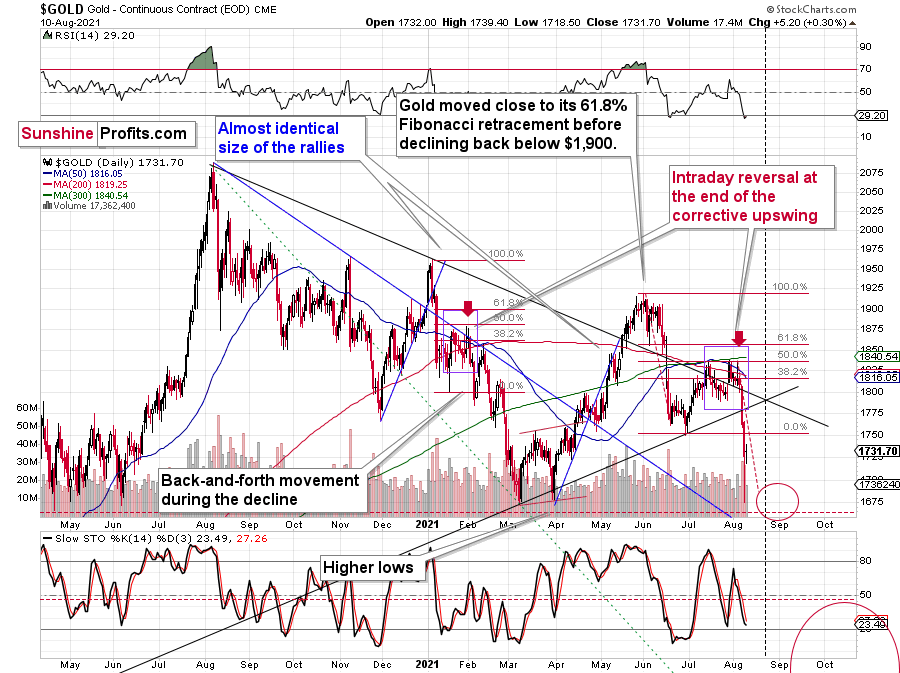 In fact, if gold moves back to the previously broken lows at about $1,750, it won’t invalidate the bearish narrative.

The Most Powerful Tool – Self-Similarity

Gold has a triangle-vertex-based reversal close to the end of the next week, which means that it could continue to consolidate or move a bit higher in the next several days, and then slide once again. Please note that this would make the current decline very similar in terms of its pace to the decline that we saw in June.

While the moves don’t have to be identical, the gold price quite often moves in similar patterns. I’ve seen this many times in the past decade (and beyond). For example, please note how similar the short-term declines that we saw between August 2020 and December 2020 were. 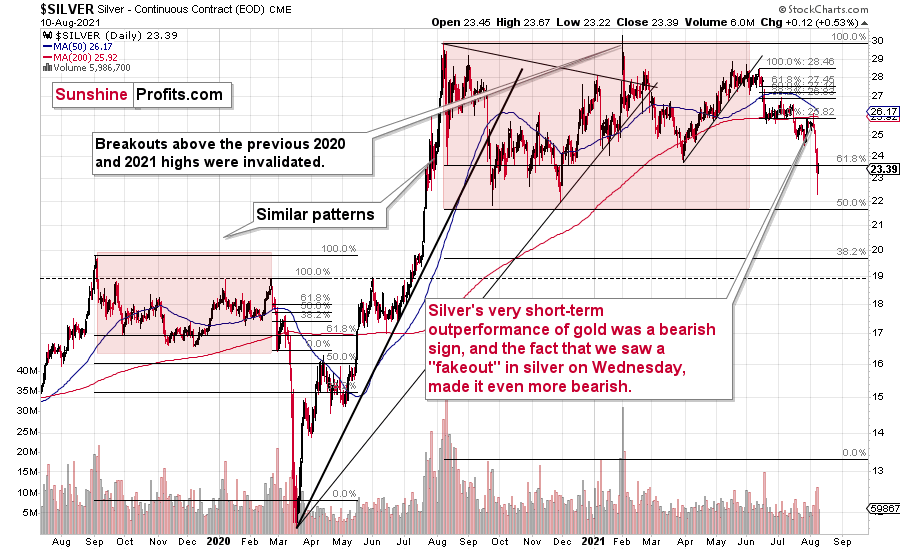 Unless silver manages to soar back above the March lows shortly (and it seems unlikely that it does), it will be likely to fall profoundly once again soon.

The inverse of the above is likely the , which is verifying its second attempt to break above its inverse head-and-shoulders pattern. 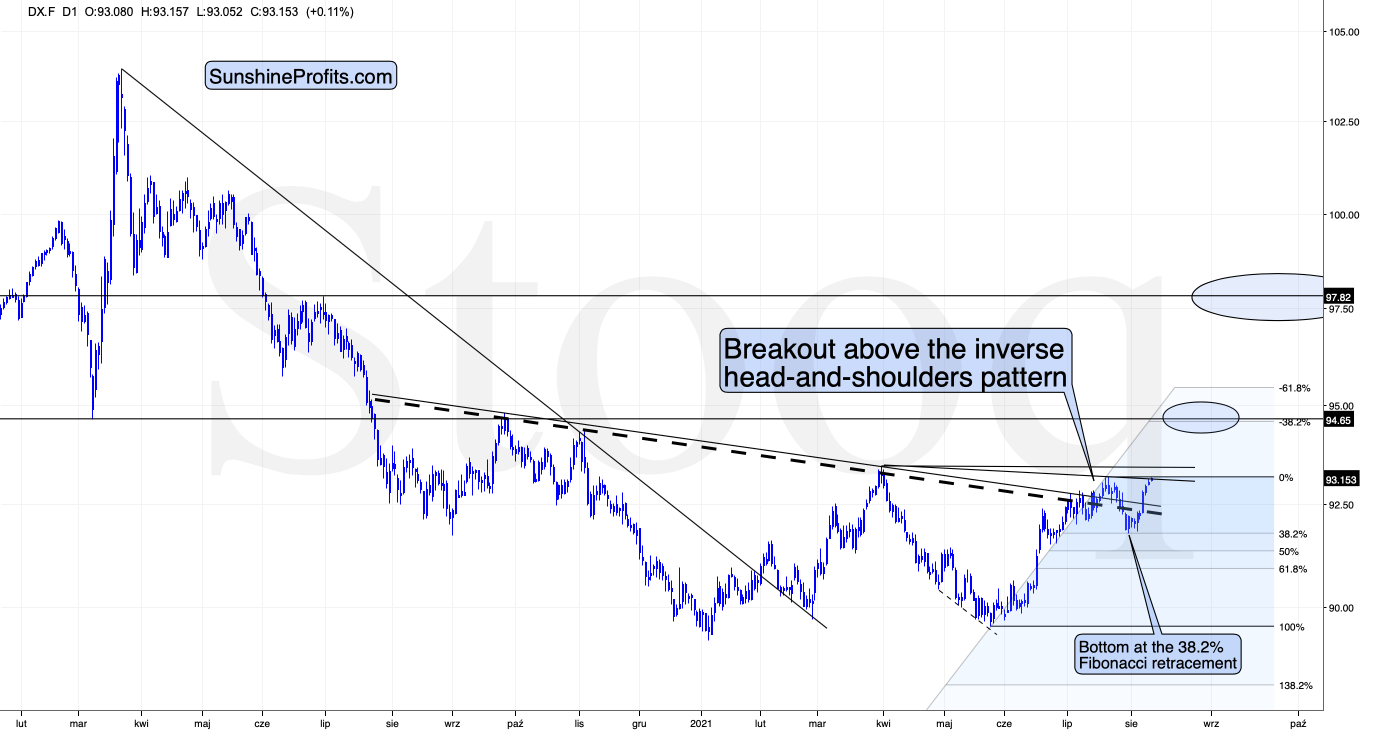 The August 2020 highs are the next short-term resistance for the USD Index, but I don’t expect it to decline significantly from there. Instead, it seems to me that the USDX will rally to almost 98 based on the inverse H&S pattern, and then it might consolidate.

So, while the USD Index and the precious metals market might consolidate for a few days (or even up to two weeks), they are likely to continue their most recent sizable moves shortly thereafter. Consequently, while I can’t make any promises with regard to the performance of any asset, it seems that the profits on the short positions in junior miners are going to increase substantially in the coming weeks.