Adoring Wednesday’s of suddenly slower growth for July’s jobs, ‘s price in turn zoomed up from Tuesday’s 1810 low to 1835.

Abhorring Friday’s of fervently faster growth for July’s jobs, Gold’s price in turn careened down to as low as 1760.

Either way, the result for Gold in swinging from the ADP report to that from Labor 48 hours later was -76 points (-4.2%), price settling Friday at 1764. By weekly measures, ’twas Gold’s worst performance and lowest close since that ending 18 June. The market never being wrong, you better believe it.

As for belief in all things StateSide-economic, we look to the Economic Barometer. Net of this past week’s 13 incoming metrics, here is the Baro’s present state from one year ago-to-date, the Labor Department making it go up straight, (which for Super Joe is really great):

The red line therein is, of course, the . At 4436, ’tis at an all-time high. Isn’t that exciting? And our “live” price/earnings ratio is now back above 50x (50.7x), well beyond double that of the p/e’s historical mean of 19.4x. Or if you prefer, nearly triple the historical median of 17.8x. ‘Course, the word “exciting” shall morph into “biting” when (as has always historically happened) the p/e again reverts to said mean (…crick-crick …crick-crick …crick-crick…) Oh there go those crickets again.

August is a lovely month for northern hemisphere crickets. ‘Round these parts, the provençal crickets team up each evening with the cicadas in auditory orchestral splendor as if in celebration of Gold’s typical August price rise. But thus far in this young August, hardly august is Gold as apparently all is right with the financial foundation of the States, and thus in turn, the industrialized world. To wit:

■ The U.S. Congress has just missed the deadline to raise the debt ceiling, (but up ’twill go);

■ The U.S. stock market at its all-time high confirms the new paradigm of earnings being meaningless.

Not so much crashing but certainly correcting was Gold this past week. Friday, at the noted price of 1764, we recall Gold having first achieved that level exactly 10 years ago come Monday (on 09 August 2011) when the U.S. money supply was $9.46 trillion. Today ’tis $20.87 trillion. See our opening Gold Scoreboard and cue Luke Skywalker: “There’s something not right here…” —[The Empire Strikes Back, Lucasfilm/20th Century Fox, ’80].

“But mmb, back then you flat out stated that Gold ‘had gotten ahead of itself’…”

Indeed we did, Squire, and we appreciate your recollection thereto. Fast-forward to today however, and we can flat out state that Gold is considerably behind itself. You regular readers who well-understand that can call your local sovereign bank to remind them of that.

Indeed with respect to corporate earnings and currency debasement: 10 years ago had we presented the following two numbers to you—1764 and 4436—and had then asked you which two markets would be priced at those levels 10 years hence, clearly the answer would have been respectively the S&P and Gold. And yet today, ’tis total transposition from logic. “The prosecution rests.”

Not resting is Gold’s weekly parabolic Short trend, which had appeared without any material downside across the prior five weeks. But then the bad guys just showed up: 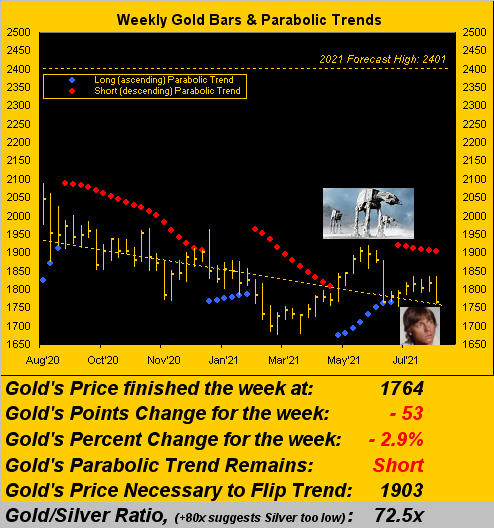 Still, with the perspective of looking back across the past 10 years of Gold’s daily closes, we are seeing some magnetism between price and its infamous 300-day moving average, the latter itself rising, but at a reduced rate. And it remains a fair piece away, our top line there for 2401 this year. We’ll simply have to wait and see how Gold shall fare upon the anticipated “all going wrong” scare … “Coming this fall in living color on CNBS”:

Meanwhile within the ongoing Federal Reserve pie-fight, (despite the Federal Open Market Committee all voting alike), FedViceChair Richard “Clearly” Clarida in an address this past Wednesday suggested the Fed could raise rates as soon as 2023. “Uh Dick… what about now?” (Just sayin’, but that would elicit the -67% S&P correction). And yet previously, FedGov Lael “The Brain” Brainard had just rather conversely stated that ’tis still too soon to taper. So on goes that caper.

In true taper is the track of Gold’s “Baby Blues”, the dots of linear regression trend consistency falling as we below see on the left across price’s daily bars from three months ago-to-date. Where does price stop its descent? The cluster at mid-graph (1796-1750) ought offer structural support, through much of which price has already traveled. Were that zone to fail (don’t say it) 1674 comes onto the board. But the good news for you Fibonacci Fans out there is—basis that 1674 March low—Gold’s overall fall from 1919 (since 01 June) essentially completed a Golden Ratio retracement ’round this past week’s noted low of 1760. As for the 10-day Market Profile on the right, Gold’s reclamation of 1804 for a start would be smart, which is possible given the current “expected weekly trading range” of 51 points for the yellow metal: 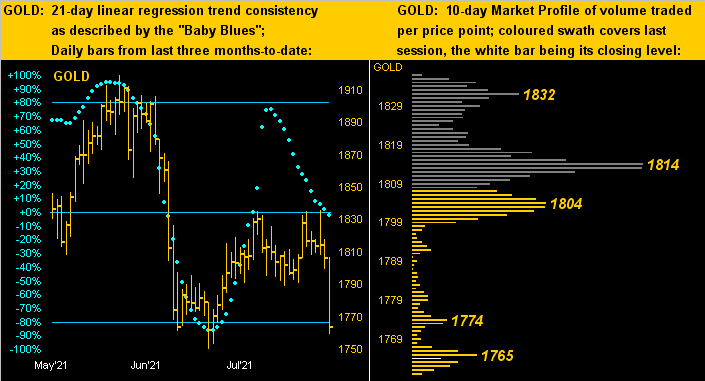 Sadly for Sister , ’tis all been going wrong for her, rather than (as yet) for the S&P. Even after the big song-and-dance we herein did a week ago in citing that Gold’s linreg trend was up, as was that for , and that historically when same has been down for Silver that she then turns right ’round upward toward gaining three full points across several weeks. BUT: Gold’s linreg trend (thank you Labor survey) has just now rotated to negative, whilst that for Copper appears swiftly en route to so doing. Here are Silver’s daily bars at left, and Profile at right. Silver entered structural support at 25.69, which extends (off the chart) to as low as 23.74, should the white metal that far bore: 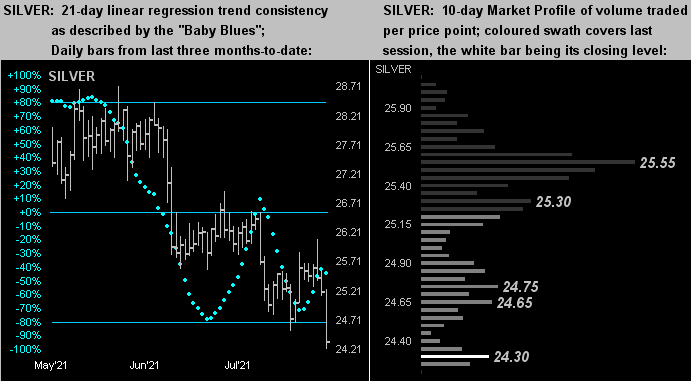 Having mentioned Cousin Copper, as a bonus graphic here is its stance, the “Baby Blues” (left) obviously running out of puff, with price buried near the base of the Profile (right). ‘Tis looking like a test of the teens is in the trend for the red metal: 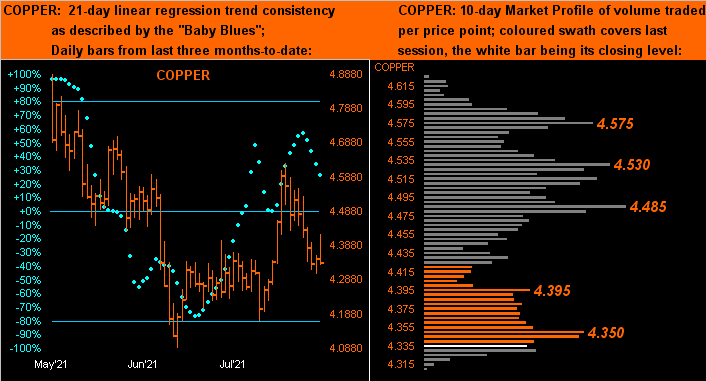 Next week for the Econ Baro is “inflation week”. Transitory? Or Perma-Story? Regardless of Gold’s having been thrust into August a cussed bust in succumbing to the Labor survey, as written to our Investors Roundtable yesterday, ’tis an opportune time to buy Gold and Silver with both fists, “Allez, Allez”!