The Fed acknowledged the economy’s progress, but it’s still not “substantial progress.” In short, Fed Chair Jerome Powell merely slowed the hand of the tapering clock.

Last week (July 28, 2021), the FOMC published its newest statement on monetary policy. The publication was barely altered. The Fed noted that the U.S. economy has continued to strengthen, although the sectors most heavily hit by the pandemic haven’t fully recovered yet. According to the FOMC members, the economy continues to depend on the course of the coronavirus, but not “significantly” any more. So, the Fed acknowledged that the American economy has strengthened (even with the recent worries about the Delta variant) and we are returning to post-epidemic normalcy. Theoretically, it’s bad news for , but this is something we all know, so the practical impact should be minimal.

A much more interesting change in July’s FOMC statement is the part about the Fed’s asset purchases:

Last December, the committee indicated that it would continue to increase its holdings of Treasury securities by at least $80 billion per month and of agency mortgage‑backed securities by at least $40 billion per month until substantial further progress has been made toward its maximum employment and price stability goals. Since then, the economy has made progress toward these goals, and the committee will continue to assess progress in coming meetings.

As one can see, the U.S. central bank admitted that the economy had made progress towards its goals, but it was just “progress,” while the Fed needs “substantial further progress” to normalize its monetary policy. So, we still have some distance to the tapering of quantitative easing.

However, the emphasis that the economy has made progress towards Fed’s goals is a hawkish signal that the tightening cycle is on the way. This is, at least, how markets interpreted the message, as the likelihood of a 2022 interest rate hike has initially increased after the FOMC meeting, according to the CME’s FedWatch tool.

This would be bad for gold, but Powell held out a helpful dovish hand. During his press conference, he noted that the U.S. economy is far away from reaching “substantial further progress” toward the maximum employment goal.

In coming meetings the committee will again assess the economy’s progress toward our goals, and the timing of any change in the pace of our asset purchases will depend on the incoming data. As we have said, we will provide advance notice before making any changes to our purchases (…)

We’re clearly a ways away from considering raising interest rates. It’s not something that is on our radar screen right now. You know, so when we get to that question, when we start to get to the question of liftoff, which we are not at all at now or near now, that’s when we’ll ask that question. That is when that will become a real question for us (…)

And, again, it’s not timely for us to be thinking about raising interest rates right now. What we’re doing is we’re looking at our asset purchases and judging what is right for the economy and judging how we — how close we are to substantial further progress and then tapering after that.

What does the recent FOMC meeting imply for the gold market? Well, as the chart below shows, the recent statement on monetary policy wasn’t particularly impactful on the yellow metal. Gold declined slightly below $1,800 on the day of the publication, but it increased to $1,829 the next day. Since then, the price of the yellow metal has returned to the level of around $1,800. 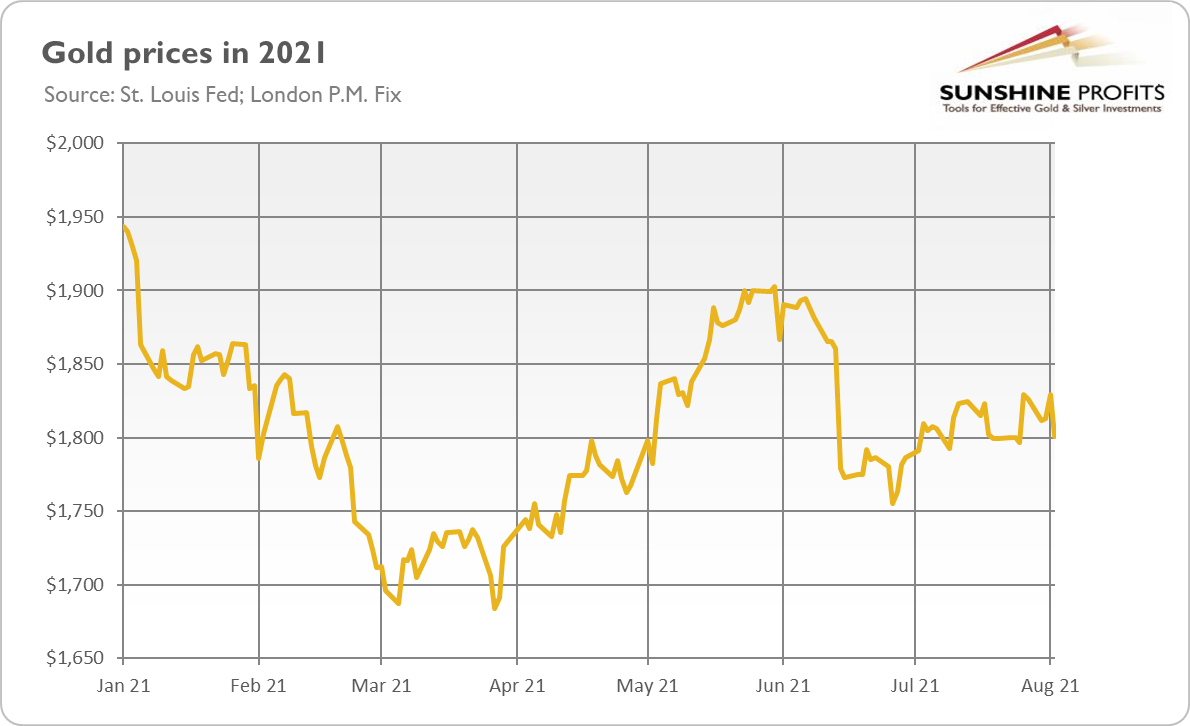 However, the FOMC’s decision may have some longer-term implications for the gold market as well. On the one hand, the statement and Powell’s press conference were dovish, as they emphasized that – despite some progress – the substantial progress hasn’t materialized yet, so we are still ahead of the tapering, not even mentioning any hikes in the interest rates. So, gold could catch its breath.

On the other hand, the tapering clock is ticking. In June, the Fed started talking about tapering, while last month it noted that some progress has been made towards its goals. It’s likely that within a few months mere progress will transform into substantial progress, especially given that the job gains in July were strong and above the forecasts. With further improvements in the labor market, the expectations of a more hawkish Fed should strengthen, exerting downward pressure on the gold prices.